Rediscover the age of nautical exploration with the Bluenose II - Schooner from Everything Nautical. This beautiful FULLY ASSEMBLED model ship has a natural wood finish, making it an elegant piece of decor that you can display in your home or office.

Hand-crafted by skilled artisans, it features wooden booms that are connected to the main and foremast, and sails that are rigged beautifully together to make up the beautiful boat. On the deck, there are authentic hand-built lifeboats with ribs and planks. The bowsprit goes through the gunwale that is held securely to the bow by riggings. To add more authenticity to the model ship, cabins and companionways are located on the wooden deck, while metal anchors near the gunwale are inside the two golden ornament pieces.

In its day, there was no yacht like the Bluenose II -Schooner, a fishing schooner that combined efficiency, beauty and speed. It was built in Nova Scotia in 1921 to fish the rough waters off the coast of Newfoundland. It would stay out on the sea until its holds were full of cod, using salt to preserve its catch. But the Bluenose left its mark in history as a racing ship. For 17 straight years, it won the International Fisherman’s Trophy, awarded to the winner of races among real fishing schooners that worked the Grand Banks. With Capt. Angus Walters at its helm, the Bluenose II prevailed year after year and it became an enduring symbol of the maritime spirit.

A perfect gift for the boating enthusiast, the passionate collector or simply those who appreciate the nautical life.

Pick up the Bluenose II - Schooner -  from Everything Nautical, a family owned, U.S. based business that has been serving the online nautical community since 1998. When you shop with us, expect to receive personal service each and every time. 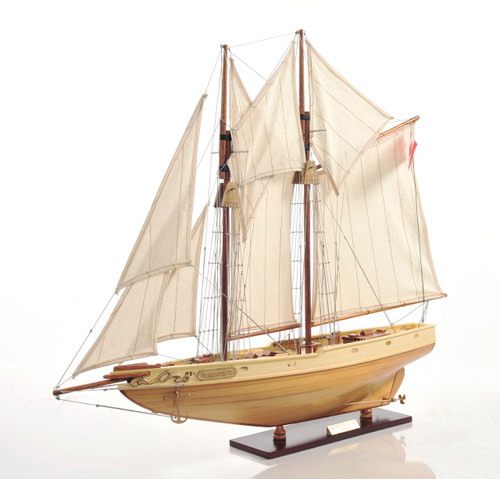