Everything Nautical proudly presents the Shamrock Shamrock Limited Model Sailboat - 27". Increased craftsmanship and significantly upgraded deck features highlight our newly redesigned Limited Edition model sailboats of Irish challenger to the America’s Cup, the racing yacht Shamrock. Namesake of a proud lineage of Irish racing contenders, the wind and waves will take you away with Shamrock in this Limited Edition yacht model. As a high-quality model with finely-crafted features and graceful lines, these Shamrock model sailboats are perfectly sized to suit a sunroom mantle, bedroom shelf or office desk.

The Shamrock was the unsuccessful Irish challenger for the 10th America's Cup in 1899 against the United States defender, Columbia. Shamrock was designed by third-generation Scottish boatbuilder, William Fife III, Jr., and built in 1898 by J. Thorneycroft & Co., at Millwall on the Thames near London, England for owner Sir Thomas Lipton of the Royal Ulster Yacht Club (and also of Lipton Tea fame). The Shamrock was built of all-metal construction, with a steel frame and a pine deck. She was skippered by Captain Archibald "Archie" Hogarth.

Career
Shamrock (also known as Shamrock I, to distinguish it from its successors) was built in 1898 under a shroud of secrecy, and christened by Lady Russell of Killowen at its launch on June 24, 1899.

During its trials it raced against the 1895 America's Cup challenger, Valkyrie III, as well as twice beating the Prince of Wales' royal yacht, Britannia in regattas on the Solent. It sailed to New York for the America's Cup race in the summer of 1899. The Cup defender Columbia beat Shamrock in all three races. It returned to Britain in the autumn of 1899, towed by Lipton's steam yacht, Erin. It was subsequently refitted by Lipton and used as a "trial horse" to test the later challengers, Shamrock II, III, and IV.

Buy the Shamrock Limited Model Sailboat - 27" today from Everything Nautical. We are your most trusted source for all of your nautical decor needs.  Serving thousands of customers since 1998, we are a family run, U.S. based company.  You can always count on accurate and easy to understand personal service, like no one else. 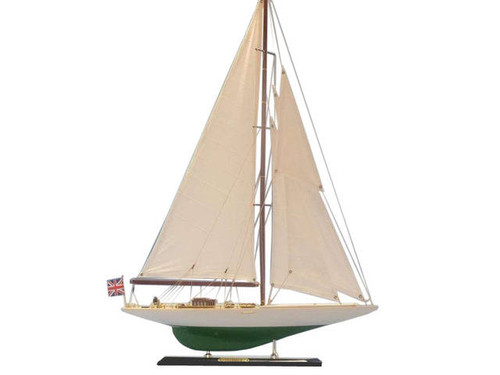