The Chinese Junk from Everything Nautical could be your next treasure! A junk is a boat used in China that usually has around two to four sails. An average sized junk usually carries food from city to city, while very large junks are usually used for worldwide trips. The first Chinese junks were built in the Song dynasty between 960-1270. Later in 1271-1368, a Mongol emperor built the first Chinese imperial treasure fleets. These junks sailed to Sumatra, Ceylon, and southern India. The famous explorer, Marco Polo journeyed to the Mongol court and described seeing four-masted junks that had sixty cabins for merchants and crews of up to 300.

This stunning replica of the Chinese Junk is built with quality wood from scratch by master craftsmen using “plank on frame” construction, just like real ships. Strip by strip, small planks of mahogany and teak were put together and a smooth surface was created. This model’s amazing details include: wooden front, main and mizzen masts, fabric sails with wooden frame, metal anker, brass cannons, wooden life boat, detailed decking with wooden stairs and sky lights. For your convenience, it also comes with a sturdy wooden stand and metal nameplate.

Pick up the Chinese Junk today from Everything Nautical, a U.S. based family business offering quality nautical decor and old fashioned personal service since 1998. 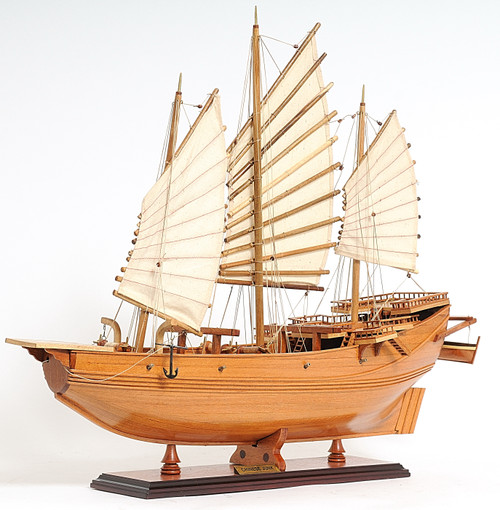