Everything Nautical proudly presents the Bluenose Model Sailboat - 24". With a sleek elegance that won her numerous titles in both racing and fishing competitions, this brilliant model livens up any room or office. Amazing craftsmanship and attention to detail bring this fully assembled model yacht to life, adding a majestic piece of both Canadian and sailing history to your life.

Built by hand by master craftsmen and artisans

In the early part of the 20th century, the fishing fleets in the Maritime provinces and the New England states operated under sail. The Banks were the favored fishing grounds of both Canadian and American fishermen. Their vessels were strongly constructed to weather the rigorous challenges of the North Atlantic fishing grounds but were also built for speed and holding capacity. During this era, a popular topic of discussion in the few free time hours that these fishermen had was the America's Cup races. These had started in 1851 and were a test of seamanship between the best British and United States racing schooners. In 1919, after years of domination by the Americans, a race was cancelled because of 25 knot winds and this created much distain among the rugged Banks fishermen. They suggested that the racing schooners had become too fragile and a better test of seamanship would be a competition involving the sailing ships and men who fished the Grand Banks.

It was the owner of a Halifax newspaper, William H. Dennis, who finally put the enthusiastic talk of the fishermen into concrete action. He donated a trophy towards a race for working sailors called the International Fishermen's Race. Canadian eliminations were held near Halifax on October 11, 1920. The Delawana, skippered by Thomas Himmelman emerged as the winner, just beating out the Gilbert B. Walters captained by Angus Walters. The American eliminations near Gloucester resulted in a victory by the Esperanto, skippered by Marty Welch. A best of three races was set to start at Halifax on October 30, 1920. The Esperanto won handily in two straight races, the first by nearly twenty minutes and the second by just over seven minutes. Many Nova Scotians were shocked to be so badly beaten and plans were quickly drawn up to build a better schooner. The vessel had to meet specific conditions as a working, economic fishing vessel but more speed was foremost in the minds and dreams of the maritimers.

W. J. Roue, a young naval architect, was selected to design such a fishing schooner to try to restore some of the badly eroded Canadian pride. A sleek looking craft, designed to meet the race rule specifications of 145 feet overall maximum length and racing trim water line length not exceeding 112 feet, was constructed at the Smith and Rhuland Yard in Lunenburg, Nova Scotia. She was christened the Bluenose and launched with great fanfare on March 26, 1921. The Bluenose was financed by Captain Angus Walters and four Halifax businessmen at a cost of $35,000. The launch was well in time for the Bluenose to complete a successful fishing season on the Atlantic Banks. She soon proved to be an excellent sailing vessel as the Bluenose handily won the 1921 Canadian trials over seven other competing schooners. That year, the American trial winner was the Elsie, captained by Marty Welch. Two exciting races were held in late October, both won by the Bluenose to bring the International Fishermen's Trophy back home!

Captain Walters and the skilled Bluenose crew again won the cup in 1922, beating the American challenger, the Henry Ford but after closely winning the first race in 1923 against Captain Ben Pine's Columbia, the Racing Committee awarded the second race, protested because the winning Bluenose passed a buoy on the wrong side, to the Columbia. Captain Walters refused to accept the Sailing Committee's decision and left for Lunenburg in a counter protest with the 1923 race series tied at one win each. This disagreement caused a seven year lapse in the International Fishermen's competition. During this period, the Lunenburg fleet was severly battered by rough seas, including the Bluenose. However, repairs were made and in 1930, the Bluenose accepted a race challenge in Gloucester, USA, to compete against a new American schooner, the Gertrude L. Thebaud, captained by Walters' old rival, master sailor Ben Pine. This time, the Bluenose lost two out of three races, resulting in absolute jubilation amongst the New Englanders, who called for a resumption of the International Fishermen's Race series. This indeed occurred in the fall of 1931 when the Bluenose met the Thebaud in Halifax waters. The Bluenose prevailed, surging ahead in two straight races and was once again named the queen of the North Atlantic fishing fleet!

A depression in fish markets was especially noticeable in 1932 as many vessels were left tied at the docks rather than losing money out on the fishing grounds. The Bluenose began a new career as a showboat, touring the Great Lakes and even crossing the Atlantic where Captain Walters was invited to attend the Silver Jubulie of England's King George V and Queen Mary. Finally in 1938, when fishing under sail had all but ended, the last International Fishermen's Cup was held off Gloucester as a test of the best of five races. The first race was won by Captain Walters' long time rival, the Thebaud, crossing the finish line two minutes, fifty six seconds ahead of the Bluenose. However, the Bluenose honour was redeemed in the second race four days later on October 13, 1938 by a handy twelve minute margin. Light winds delayed the next official race by some ten days when the Bluenose again won, this time by just over six minutes. Not to be outdone, in boisterous seas the next day, the Thebaud beat the Bluenose by some five minutes over a thirty five nautical mile course. The final race was held on October 26, 1938. In light winds, the Bluenose prevailed by a margin of just under three minutes and for the final time, took the International Fisherman's Trophy back home to Canada!

Various challenges were then made for further races but sadly, that was not to be. A sailing schooner could no longer earn a living against more economic diesel powered fishing vessels and Captain Walters lost control of the Bluenose. She was eventually sold for coastal trading in Caribbean waters and on a dark January night in 1946, the grand champion Bluenose struck a reef in waters just off Haiti. She was wrecked beyond repair although all hands were saved and so ended a glorious era of sailing history. In time, a replica ship, the Bluenose II, was built in the same Lunenburg shipyard. Thias sailing ship was launched on July 24, 1963, as a momento to the golden age of fishing schooners competing for the International Fisherman's Trophy. The original Bluenose was commemorated on a Canadian fifty cent stamp in 1928 and her likeness can still be seen today on our Canadian ten cent coin. One thing is absolutely certain, the Bluenose legacy lives on in the hearts and minds of many Canadians!

Buy the Bluenose Model Sailboat - 24" today from Everything Nautical. We are your most trusted source for all of your nautical decor needs.  Serving thousands of customers since 1998, we are a family run, U.S. based company.  You can always count on accurate and easy to understand personal service, like no one else. 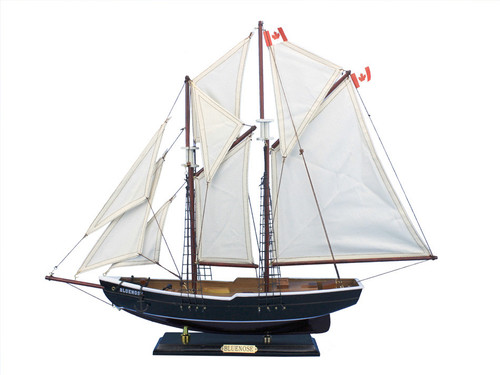